​This is not an indictment of the wonderful teachers you or I have experienced most likely in government or even private institutions throughout our lives. It is an indictment of our own folly in misappropriating the virtue of incredibly inspiring individuals to the mental prison system they operated in miraculously. This should give us hope that once again talented individuals will rise to the occasion and circumstances as we leave the faulty but familiar behind.

To those who argue for school reform, I am obligated to tell you that school has accomplished precisely what it was designed to do. It has produced an indentured slave-class. The Founders didn’t put the control of education in government hands for a reason. At that time, all Americans were taught to have a healthy distrust of government. Education (literacy and critical thinking) necessarily creates freemen. So, if the Elite’s desire is to control men (which I argue it is), and past generations would have never accepted slavery (a passive workforce) outright, why not give the people what they think they want but direct schooling toward achievement, toward data collection –feeling “intelligent” based on how many facts and figures one can hold in one’s head plus how quickly one can respond to a question like a trained circus animal? Education? Education was never the goal of our social engineer masters. Like everything else, they just needed good people to believe that’s the goal and for good people to defend a broken system intended to enslave their grandchildren and great-grandchildren. That would be YOU AND ME right NOW. The evidence that this indoctrination has succeeded is that I hear even the most well-intentioned people justify school reform as part of the necessity of “training the next generation.” Training them for what? For moral human relationships? Of course not. Training them for their job –their place in the machine is the goal.

For the time being, I am going to leave solutions to the crisis in education in the hands of parents and the mentors they choose and encourage a free-market approach. We know our children didn’t come with an instruction manual, and navigating this new frontier in education will be just as challenging. As much as I would enjoy a further discussion of educational ideas, I am once again obligated to make a warning instead.

It is not simply or only “a good health crisis” that the Mono-Government Elite won’t let go to waste. The opportunity opened by the crisis in education is at the top of their list in order to capture the next generation in a “reality” they will think is normal, but it is not. The “Future of School” and the “Future of Work” are benign enough sounding words until one asks, “Who is designing the infrastructure?” and “To what end is it being ‘reimagined?’”

You will likely be told the National Department for Education has failed. I can’t say that I disagree. We will likely cheer (myself included) if Representative Massie’s Bill HR 899 to Abolish the Department of Education is successful. The recent move the Arizona School Board Association has made along with other state school boards to remove themselves from the National School Board Association seems long overdue, and instead of “It’s about time,” I think we should ask, “Why now?” You will be told that decentralized solutions will usher in local accountability, and I agree that it all sounds very nice. It’s not. Concerted efforts are underway to “level up” education to “life” on a virtual digital ledger.
​
I am starting to see the words of John Taylor Gatto, a man I consider a mentor, being used in a way that would make him roll over in his grave. Yes, he wanted education individualized and outside of the classroom, but he promoted the curriculum of the family not substituting the family for a pseudo-family-omnipotent-state. He warned against children groomed to be cogs in a machine, and he would be outraged to find technology in the hands of social engineering elite advancing in such a way so as to promote children as commodities to be mined for their data or preprogramed onto paths under the pretense of freedom of choice. 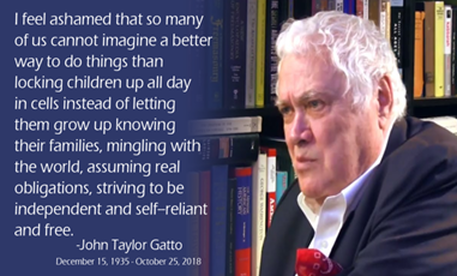 “Pay for Success” programs are being introduced as solutions to everything from education to criminal justice reform. The video quoted below was published in August 2020.

“Right now children are being shaped into slaves, and they are being taught that it is better to be enslaved than it is to be free. This is an abomination against humanity. This is ‘lifelong learning.’ This is the Fourth Industrial Revolution. What’s happening is that all curriculum in public, private, parochial, charter, and even homeschools is going to be behavioral driven. Collection of children’s data into a block chain where the child is put on a pathway of viable or not viable is based on the economic status he was born into. Children as young as three years are being treated as corporate reports. Ultimately, the children are digital creators and builders of an internet of things (IoT). The masking and physical distance and the taking away of recess, play, fieldtrips helps to train them early on that human interaction and exploration of imagination gets in the way of their pathway.”
As mentioned before, it is packaged in hip sounding phrases such as, “Future of School” and “Future of Work.” It’s a trap. A trap isn’t designed to look like the danger that it is. It’s designed to look like something you want, and it will be sold to you as something you need. If we at this critical juncture do not resist, our actions or inactions will enslave generations of children yet unborn.

This is what John Taylor Gatto meant when he talked about children, education, and fingertips. 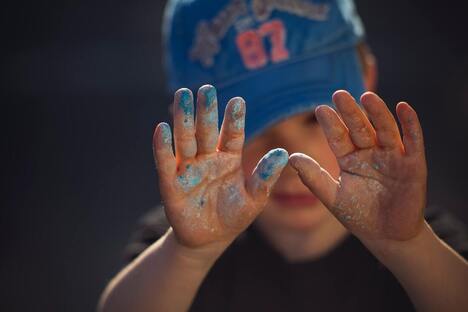 This is precisely the abomination he warned us against.