The Blind and The Border

By Dru Heaton
I am for an open mind about a complex issue. The number one problem with any discussion about the border is the emotional misappropriation of either virtue or blame. First, this issue is complex because everyone’s experience of the border is not identical, and secondly, most of what we physically see at the border is influenced by elements we do not see.

In a parable, six blind men are presented with an elephant [1]. Bringing their own prior experience and depending on their unique location to the beast, each man describes the elephant as: a wall, a fan, a snake, a rope, a tree trunk, or a spear. The convergent thinking [2] that leads each to surmise vastly different yet valid conclusions is not low IQ or dishonesty but personal experience. And who can argue with personal experience?

A CBP agent, a foreign migrant worker, a drug mule, a border Sheriff, a border resident, a border merchant and more will each have a personal experience. Additionally, not every person within each category afore mentioned will agree. Divergent thinking [3] is what is needed to generate a solution to a complex problem.

There is nothing inherently criminal about the existence of a border. There is nothing inherently immoral about crossing that border either. I can write a law to make it illegal to cross the border of my business without showing medical papers declaring it a crime, but hopefully some of you will recognize that not everything said to be illegal (criminal) is unlawful. Many of you, my fellow Arizonans and Americans, cross multiple borders a day unconsciously and without consequence: a neighbor crosses a driveway to trade eggs for sugar, a young person solicits money from you at your front door for cookies, a landscaper seeking work and income knocks on your door to hand you a contact card, and you pass a state “Leaving” sign to be greeted by a sign saying, “Welcome to…Arizona,” for example.

How is a national border different? My personal experience tells you “It is a fan,” and yours tells me, “No, it’s a spear!” The first thing to acknowledge is that we are not speaking about the same thing. I’m talking about an invisible line in the sand, and those who talk about the threat of “the spear” are talking about people. Ultimately, so am I, but stay with me. We can’t proceed to talk about how we see people differently until we see the border clearly. It is a boundary, yes, but its existence doesn’t make one a criminal for crossing it unless one is a criminal by performing a criminal act. What constitutes a crime? Aggression. Aggression is also what differentiates the same biological act either as an expression of human love or rape.

To be clear, I am deeply concerned about criminal activities along our state and national borders; however, like a Hollywood movie that has you defending and cheering for the criminals, I don’t think the average Arizonan or even average American knows exactly who the enemy is.

Concerns over the illegal drug trade inflame and consume the border discussion. However, no one ever mentions that the first drive-by shooting was a direct result of alcohol prohibition, and the first gun restriction law [4] in this country was a direct result of the same. The Prohibition of Alcohol Era was a disaster! Wait. The Prohibition Era currentlyin this country is and continues to be a disaster! What is the disconnect that perpetuates the inability to see that the prohibition of a substance (driving a market “underground”) will inevitably lead to the blood and carnage of organized crime? We blame the cartels for existing, and yet we fuel their existence. Insanity.

When I see a criminal report highlighting bad actors for their “illegal” or cultural status, I cringe.
We know what the media puppets are doing. They are inciting cultural divide, and a significant number of Americans take the bait. The few bad actors who were of Japanese descent led to the wrongful incarceration of over one-hundred-thousand innocent people during the Second World War [5]. Are Arizonans willing to do the same? At this point, I am not talking about citizenship but innocence.
As I stood in Nogales, Arizona on January 17, 2022, in the shadow of the border wall dividing what once appeared to be a single city straddling the United States and Mexico border, these words rang in my head,
“Behind me stands a wall that encircles the free sectors of this city  –
part of a vast system of barriers that divides the entire continent…
barriers cut across … in a gash of barbed wire, concrete, dog runs, and guard towers.
Farther south there may be no visible or obvious wall, but there remain armed guards
and check-points all the same. Still a restriction on the right to travel,
still an instrument to impose upon ordinary men and women the will of a totalitarian state.
Yet, it is here … where the wall emerges most clearly.
Here cutting across your city where the news photo and
the television screen have imprinted this brutal division
of a continent upon the mind of the world.” [6]
These are not the words of a contemporary journalist viewing our southern border but those of the quintessential Republican, President Ronald Reagan standing at the Berlin Wall in 1987. He continued, “as long as this gate is closed, as long as this scar of a wall is permitted to stand, it is not the German question alone that remains open, but the question of freedom for all mankind”[7]. 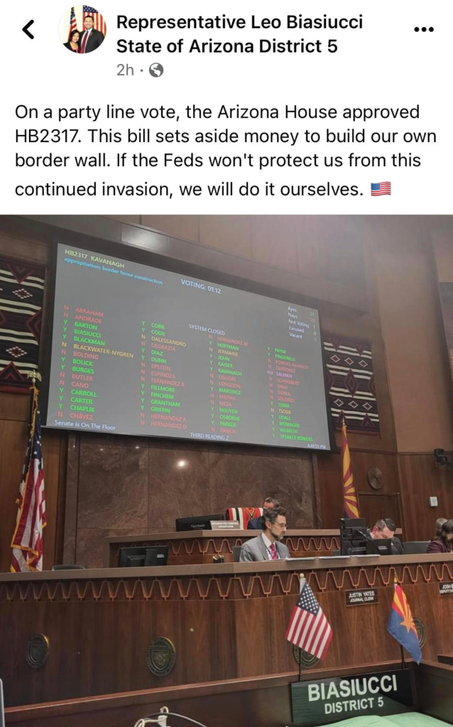 Predator and Prey: The Blind
​
The parable of the blind men and the elephant is often used to show the validity of different yet seemingly conflicting views about a subject. While that is a good take-away message, there is a greater lesson to be had. For all of the prior and personal experience they bring to the question, “What is an elephant?” their profound blindness leaves them unable to comprehend the actual beast before them. They don’t see it.

The blind is a concealment device used by predators to gain an advantage over their prey. It is unseen. Perspective is what differentiates Libertarians from other political constituents, and perspective is what differentiates me from other Libertarians. I believe we are facing the greatest threat to human liberty the world has ever experienced. There is a vast restructuring of the world’s economy occurring, including a global dispossession of property and a segregation of people in every country – including ours. The criminalization of borders is central to that plan. While the Mono-Government Elite fuel battles between Republican and Democrat preferences, Americans are distracted from the following:

Situation: You Need Protection from Terrorists

The Department of Homeland Security established under Republican President George Bush is said to have been created to protect the United States from terrorism. Through its CBP agents, the department utilizes the 100-mile border zone [9] from which the phrase “Constitution-free” zone has been coined. Although it is not literally “Constitution-free,” in this zone officials claim some extra-constitutional power specifically to suspend Americans’ Fourth Amendment rights against unlawful search and seizure. The acceptance of this violation was reaffirmed under the

Democrat President Barack Obama’s administration with Judge Edward Korman citing a “border exemption”[10]. Two out of three Americans live in areas making them susceptible to this unwarranted search and seizure of property. Additionally, since international airports located within the interior of the United States operate as ports of entry, a 100-mile radius around these facilities makes the number of Americans living in these zones much greater than initially thought. Where do you live? 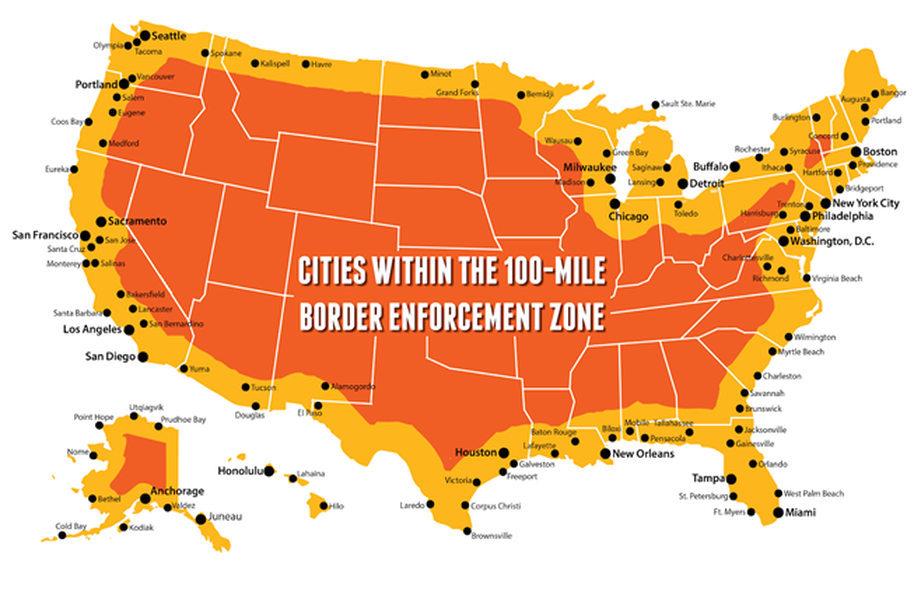 With the label “terrorist” most recently being attached to parents [11] and “even Libertarians,” [12] it’s past time to ask, “Who is terrorizing whom?” [13] THIS is the government our Founders warned us about.

In 2014, a writer for the Freedom Outpost aptly stated, “It is all about conditioning the American public to accept and comply with violations upon their God-given rights, in essence, silently consent to the erosion of the Constitution… It is boiling down to a ‘papers please’ initiative indicative of the oppression seen in East Germany and the former USSR. It is a lead in to a greater exertion of government control for an agenda that has yet to be completely exposed.”[14]

Now, the Empire isn’t merely exposed. It is naked.

Attorney Lou Michels, Jr. warned [15] in 2006 that the precedent set by the deployment of the experimental Anthrax vaccine on American military troops would prove to be a terrifying prospect for what would happen to the American public at large should an emergency be declared and there was no approved vaccine already in use. The truth of his prediction is currently underway whether individuals see it or not.

In a 2016 Notice of Proposed Rule Making [16], the HHS and the CDC declared without Congressional oversight enhanced and self-proclaimed authority that consequently equipped local health departments to detain, “quarantine,” and apprehend healthy people prohibiting their movement especially between states. This is currently happening whether individuals see it or not.

At a time when government law enforcement departments have been purged of those with an “I will not comply” moral compass, when the Governor of this state has empowered the preparation of FEMA sites under a pretense of public health [17], and when the law enforcement void is being filled by state police who are selected based on compliance, I feel the need to warn those who welcome the idea of militarizing our border. It did not escape my notice that the razor wire in Nogales, Arizona, was firmly attached on the U.S. side of the border wall. Walls are not only designed to keep people out. They also serve to keep people in. Some of you think the Republicans are the problem. Some of you think the Democrats are. I am here to tell you that our actual predator, the Mono-Government Elite are in the blind, and I imagine they are watching amused as a significant number of Americans shout for their own incarceration. “Build the wall! Build the wall! Build the wall!” “War” is when the government tells you who the enemy is. Revolution is when you figure it out for yourself.

Unlike the children’s story [18], the American crowd doesn’t applaud the truth-teller or even praise the whistleblower. In the real world, the boy is ridiculed, rejected from society, or likely killed. To those who seem desperate to explain away our awful situation or my assessment as unwarranted, I can only restate C.S. Lewis’s warning: “If you see through everything, then everything is transparent. But a wholly transparent world is an invisible world. To ‘see through’ all things is the same as not to see.”[19]

As it affects our state and national borders:

I am for ending the welfare state in Arizona.

I am for ending American Imperialism in foreign policy.

I am for decriminalizing the Southern Arizona border.
1.http://tibetanbuddhistencyclopedia.com/en/index.php/The_parable_of_the_blind_men_and_the_elephant
2. Convergent Thinking: thinking (as in answering a multiple-choice question) that weighs alternatives within an existing construct or model in solving a problem or answering a question to find one best solution and that is measured by IQ tests.
3. Divergent Thinking: creative thinking that may follow many lines of thought and tends to generate new and original solutions to problems.
4. https://uslaw.link/citation/stat/48/1236
5. https://history.house.gov/Records-and-Research/Listing/lfp_004/
6. https://www.youtube.com/watch?v=5MDFX-dNtsM
7. Ibid.
8. Ibid.
9. https://www.aclu.org/other/aclu-factsheet-customs-and-border-protections-100-mile-zone?redirect=immigrants-rights/aclu-fact-sheet-customs-and-border-protections-100-mile-zone
10. https://www.natlawreview.com/article/judge-upholds-border-search-laptop-against-constitutional-challenge-0
11. https://sentinelksmo.org/justice-dept-threatens-to-sic-fbi-on-parents-as-domestic-terrorists/
12. https://wearechange.org/even-libertarians-john-brennan-issues-list-of-ideologies-biden-intel-community-should-go-after/
13. https://www.nationalreview.com/corner/is-your-neighbor-a-covid-information-terrorist-are-you/
14. https://investortimes.com/freedomoutpost/judge-upholds-constitution-free-zones-100-miles-inside-borders/
15. Lou Michels, Jr. ’85 | Warning Shots: The Military’s Anthrax Vaccination Program & Its Consequences https://youtu.be/kGgPdOIa_9E
16. https://www.govinfo.gov/content/pkg/FR-2016-08-15/pdf/2016-18103.pdf
17. https://tucson.com/news/arizona_news/state-will-allow-federal-vaccination-center-in-pima-county-but-questions-its-ability-to-run/article_231917d8-1061-569c-ac48-c016d7fd30e6.html
https://apnews.com/article/arizona-coronavirus-pandemic-3c4349036fd73df52ae9f9f832132406
18. https://andersen.sdu.dk/vaerk/hersholt/TheEmperorsNewClothes_e.html
​19. https://archive.org/details/TheAbolitionOfMan_229/page/n29/mode/2up